History of the Guernsey Breed

The Guernsey can be traced back to its origin in the Isle of Guernsey, a tiny island in the English Channel, just off the coast of France. It was here in approximately 960 A.D. that Robert, Duke of Normandy (predecessor to William the Conqueror) sent the monks to Guernsey to defend the land and educate the natives. The monks took only the finest in French cattle with them, the hardy Norman Brindles from the province of Isigny and the famous red Froment du Leon breed from Brittany. It was from these animals that they developed the high quality dairy cow we now know as ‘The Guernsey’.

The Norman Brindles were known for producing high volumes of golden coloured milk whilst eating the harshest of pastures and without any supplementary feeding. The golden colour of the milk was unique and believed to be associated with their characteristic deep yellow pigmented skin. This colouring is still evident in the Guernsey today, most notably around the horn base, inside the ears, around the coronary band of the hooves and when parting the switch of the tail. It is believed that this pigment has also allowed the Guernsey to adapt and thrive in sunny environments as well as tropical and subtropical regions. The Froment du Leon in comparison were smaller, hardy red coloured animals with markings similar to what we see in the Guernsey today. They were very docile in their temperament and their toughness allowed them to be used for draught work. During these times there was limited pasture availability and so cross breeding to create a docile, moderate sized, adaptable cow which produced rich golden milk was ideal for the island. They also discovered that not only did the Guernsey produce golden coloured milk but the milk was able to be turned into quality products, particularly butter with a minimal amount of labour.

Knowing they had stumbled onto something special with the development of the Guernsey cow, the focus on the island turned to preserving the purity of the breed. In the late 1700s they began placing restrictions on importation of animals and by the early 1800s importation of live cattle to the Isle of Guernsey was prohibited. Any animal that left the island was also prohibited from returning unless going straight to slaughter. This law has been rigorously upheld ever since and to this day the only breed of dairy cattle on the Isle of Guernsey are the Guernsey. All pedigree Guernseys across the world today can trace their ancestry back to the foundation stock from the island.

The Guernsey Cow was first imported into Australia in 1898 thanks to Mr MA O’Callaghan, a dairy expert in the NSW Department of Agriculture. The initial import by the NSW Department of Agriculture included three bulls and six cows and they placed an emphasis to farmers on utilising the bulls in commercial herds to upgrade to Guernsey. Further imports of Guernsey animals followed in the early 1900s to establish the breed in Australia. The interest in the Guernsey cow was growing and on April 14, 1911 the breeders held a conference at the NSW Royal Agricultural Society’s showgrounds in Sydney and the Guernsey Cattle Society of Australia was formed. In 1912, with Guernsey numbers expanding, the society decided the time had come to create an Australian Guernsey Herd Book. Admission into the herd book required animals to have been registered in a recognised herd book prior to being imported into Australia or be the progeny of these animals. The first Australian Guernsey Herd Book was then published in 1914.

Since then both the Guernsey cow and the Australian Guernsey Society have undergone steady progress. Member numbers increased from 20 in 1914 to over 700 in the 1950s-60s across New South Wales, Victoria, Western Australia, Queensland, South Australia and Tasmania. By the late 1980s member numbers had reduced to 350 and today we have approximately 90 members across the 6 states. The society itself expanded with the development of state branches in NSW, Queensland, Victoria, Tasmania and a combined SA/WA branch. We have also seen the development of sub branches and district clubs in some states.

The first showing of Guernsey cattle in Australia was recorded in 1906 at the Sydney Royal Show. The Bull class was won by Flaxly’s Prince exhibited by Mr Sylvester Brown. Prince was sired by Rose Price 54 and out of Flaxy 52 who were both part of the original import of Guernseys to Australia. The cow class was won by a cow called Creamer, exhibited by Mr George Ray of the Picton Stud. Championship classes were not introduced until 1910. Since then Guernsey cattle have been exhibited extensively at calf days, country shows and royal shows all across the country.

The Guernsey cow has come a long way since 960 A.D. and is now considered a global breed with Guernseys able to be found in many countries around the world. Along with Guernsey Island and Australia this includes England, the United States, Canada, New Zealand, South Africa, Italy, Thailand and the United Arab Emirates among others. This is owed in part to the live export of animals around the world but more so due to the development of artificial insemination and embryo transfer technologies which have opened up international markets. These developments have not only allowed for expansion of the breed but significant genetic progress within the breed. The majority of Australian genetics are now derived from the northern hemisphere, in particular the United States who have the largest population of Guernsey cattle in the world. With all these changes there are however some things that never change, the quintessential traits for which the Guernsey is known – the docile temperament, the golden colour, their ability to adapt and the high quality milk they produce. 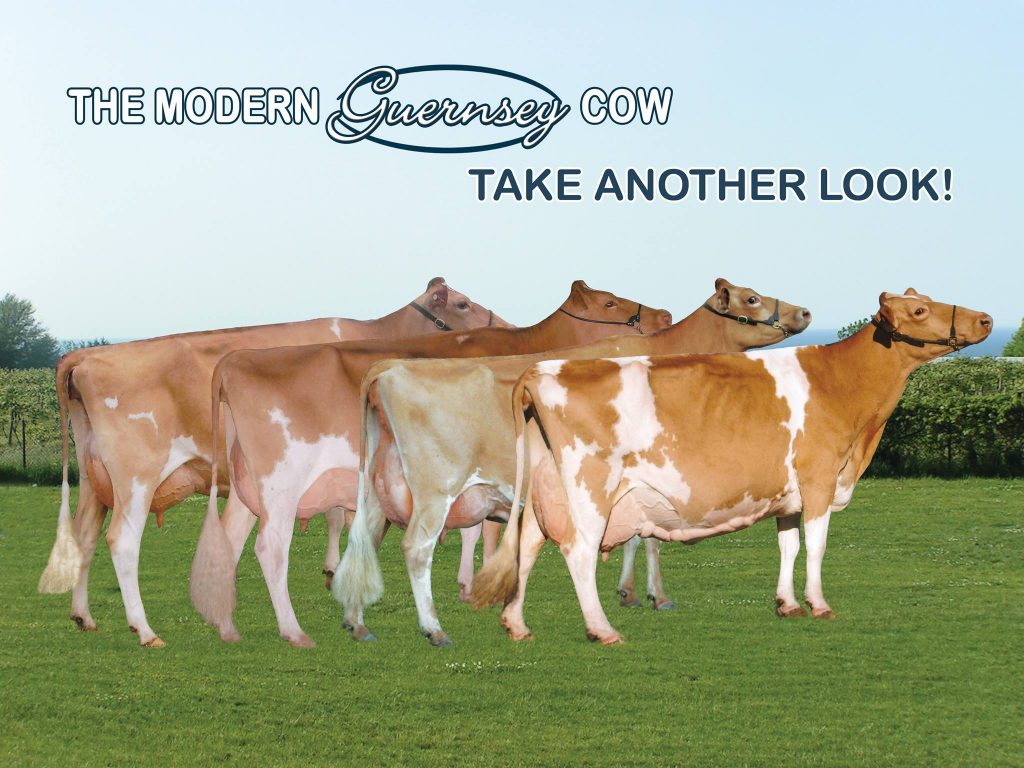 Guernsey milk is highly sought after with their naturally occurring high percentage of A2 protein, the high butterfat and protein content, high betacarotene levels and superior cheese producing properties. These features make Guernsey milk an ideal product from which to produce premium products including cheeses, butter, yoghurt and ice cream. With niche markets for these products continually opening up worldwide there is unlimited potential for the Guernsey cow and the ‘World’s Finest Milk’. 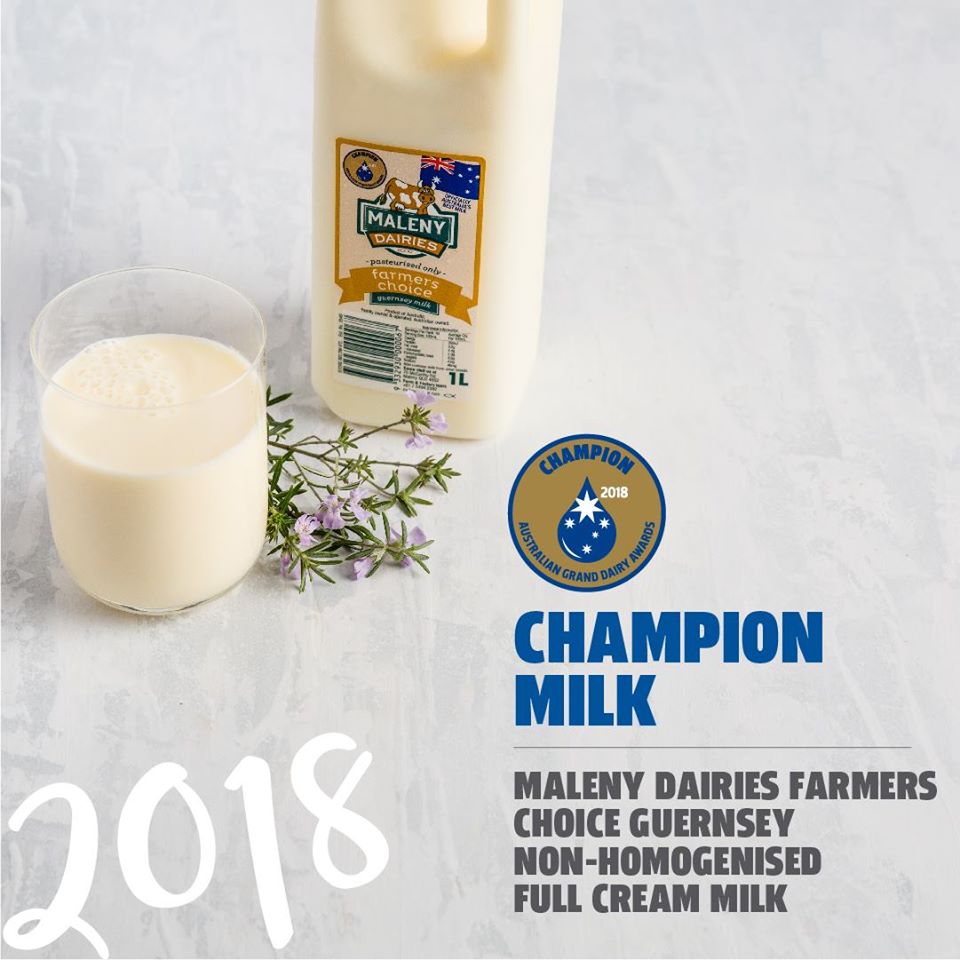 The increasing demand for premium dairy products and the growing demand for Guernsey cattle offers the breed a bright future. However, it is up to us as Guernsey enthusiasts to nurture and protect the Guernsey breed to make the most of these opportunities.

Maleny Dairies in Queensland are leading the Guernsey resurgence in Australia with their range of premium Guernsey products, most notably their Gold Top non homogenised full cream milk which was awarded the People’s Choice Award in the Australian Grand Dairy Awards in 2019. The Gold Top milk had previously been awarded Champion Australian Milk in 2017 and 2018. They are continuing to expand their business and encouraging the farms that supply them to convert to Guernsey.

Another Guernsey niche marketing success story is The Grumpy Farmer in Western Australia who obtain their milk from the Gilbert Guernsey herd. In 2018 they were awarded the ‘delicious’ state produce award for their Guernsey milk, a much sought after accolade.